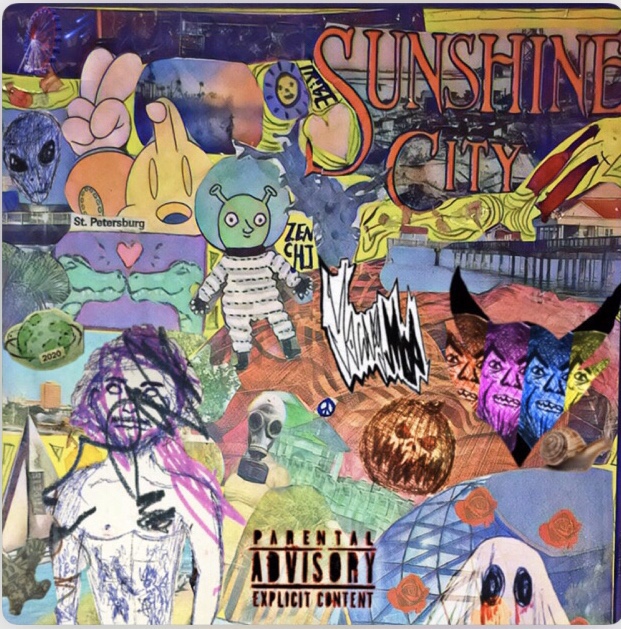 Coming off his “Beach Bum” album that dropped earlier this year, St.Pete native Young Mop out of the Tribe Collective brings us his darkest effort to date on “St.Creaturesburg”.

The intro “Witchez, Crowz, & Wolvez” sounds like Mop is spitting from a graveyard bringing that old school Bone and three six vibe. The track starts off slow and somber but by the end Mop comes through with a barrage of bars.

“Martian Beam Freestyle” at the beginning feels like it could be “Unsuccessful 2” with an insane video game style beat.

“King Of The Jungle” is my favorite track off “St.Creaturesburg”, being a Leo it hits a little different. The swampy sounding horn beat from Nictunez. It would be dope if we could get some visuals for this soon.

“$peed it up!!!” has more of an underground NY style vibe reminding me off how Da$h used to spit on his old tapes. This one prob my second favorite on the project.

On “State Fair” Mop comes with a new street anthem. This one will have you chanting “we don’t fight fair, we don’t play fair” all day. We definitely need some visuals for this one.

Kmon Beats comes through with one of my favorite cloud rap beats he’s done on “Stardust”. From the hook to the verses mop paints a picture of what happens when your off that stardust.

“Don’t Lose Hope” is one of the more introspective tracks on the project. The glistening hi hats are spliced throughout the hazy production that Mop floats over. This one is more about the vibe it gives off rather than the bars.

The break out your shell metaphor on “Snail Shell” furthers the darker themes on “St.Creaturesburg” that Mop has touched on throughout the project.

The “Siamese Twinz (outro)” has Mop on his storytelling shit to end out the project. This project fits the Underground Florida Hip Hop esthetic that acts like Robb Bank$, Denzel Curry, and Raider Klan put out back in the day, but with a fully St.Pete Hip Hop spice to it. Mop has stated this will be his last “trap” album, taking a shift in his musical direction. Be on the look out for other dope St.Pete Hip Hop and projects from Young Mop and Tribe in the future.

One Reply to “The Dark Heart Of A Lion.”